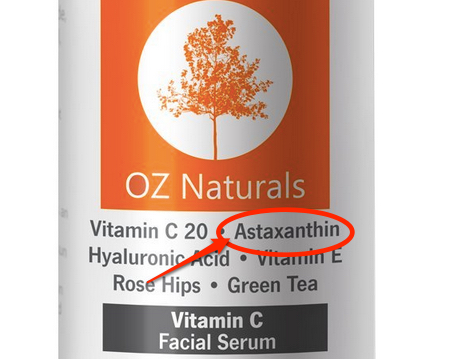 Just What the Heck is Astaxanthin or Pro-Astax20? We Explain

Recently Oz Naturals, a vegan skin care line, has reformulated their much-loved Vitamin C serum to include astaxanthin (which they call Pro-Astax20), and people are wondering just what is astaxanthin?

First, to be clear, Pro-Astax20 is Oz Naturals’ trademarked brand of astaxanthin. 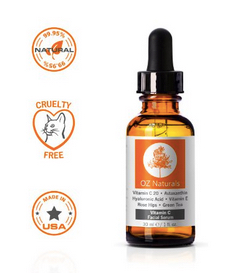 So, just what is astaxanthin?

According to Dr. Mercola, astaxanthin is a carotenoid and a super anti-oxidant. In fact, he claims that he consumes some astaxanthin every day, since learning of its amazing effects on the body.

And according to Wikipedia (for whatever that’s worth), “The primary use for humans is as a food supplement. Research shows that, due to astaxanthin’s potent antioxidant activity, it may be beneficial in cardiovascular, immune, inflammatory and neurodegenerative diseases.”

But this all relates to taking it internally; what about for topical application? Is astaxanthin actually good for your skin if used topically?

Yes! According to SmartSkinCare.com, which is written by a PhD doctor with a Ph.D. in Biology, M.S. in Molecular Biology, and B.S. in Chemistry, astaxanthin has a lot of great benefits for the skin when used topically! According to the site, some of the benefits of topical astaxanthin include various methods of providing protection from sun damage, including that “First, it blocks a modest amount of ultraviolet light directly (not enough to be an effective sunscreen by itself but still useful). Second, it neutralizes some of the free radicals induced by UV radiation and responsible for some of the sun damage. Third, astaxanthin appears to inhibit the induction of matrix metalloproteinases (MMP) by UV light. (MMP are an important factor in sun damage and skin aging.)”

Doctor Todorov also points out that “Astaxanthin is a potent fat-soluble antioxidant and thus should be able to protect fat-rich tissues (inluding the skin) particularly well. It is likely to be a useful skin protector from various types of skin damage, not just UV radiation. Another potentially useful property of astaxanthin is its ability to regulate so-call gap junctions, which are channels of cell-to-cell communication common in skin cells such as fibroblasts. Gap junctions tend to become disregulated with age and normalizing their function may help improve skin texture.”

And Dr. Josh Axe, a chiropractor who is also a C.N.S. Certified Nutrition Specialist, and expert in Natural Medicine, says that Japanese researchers found that when women applied astaxanthin to their face for 8 weeks, at the end of that 8 weeks, “the women’s skin improved with respect to wrinkles, texture, elasticity, and age spots”! That said, the women also took an astaxanthin supplement (internally) at the same time.

Finally, according to Dermascope, “Topical application of astaxanthin offers multiple skin benefits and provides a new dimension for anti-aging technology.”

It should be noted that astaxanthin is found in microalgae and yeast, but also in some fish and shellfish, and also in the feathers of some birds (it is what provides a pink or red colour, and in fact it is what gives flamingos their lovely pink colour).

It can also be made synethically.

So, be sure of the source before you buy a product with astaxanthin, or an astaxanthin supplement.

You can get OZ Naturals Vitamin C Serum with Astaxanthin on Amazon here.

Article Name
Just What the Heck is Astaxanthin or Pro-Astax20? We Explain
Description
Recently Oz Naturals, a vegan skin care line, has reformulated their much-loved Vitamin C serum to include astaxanthin (which they call Pro-Astax20), and people are wondering just what is astaxanthin?
Author
Anne P. Mitchell
Spread the love
Review by: VGBP