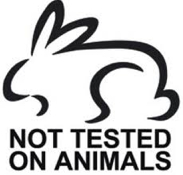 In her 15-year career working on behalf of animals, she has led campaigns on reforming the cruel trapping and fur industries, and bringing attention to the likes of the illegal bird trade, the reality behind animals sold in pet shops and at flea markets, and farm animal transport. She now leads Cruelty Free International’s North American efforts to end cruel cosmetic testing, so naturally we were clamoring to talk to her after this week’s huge announcement. Monica was nice enough to take time out of what must be a hectic week, to talk to us about this landmark bill:

Vegetarian Beauty Products: Wow, this news is so exciting and must be a huge relief to you; did you ever imagine that you’d see such a landmark bill introduced during your career?

Monica Engebretson: Yes, it is exciting news. In order to do this work, I had to imagine that it was possible despite being told that there was no chance. It’s easy to get jaded working on animal issues in the United States, we always seem to lag behind our friends from across the pond on animal welfare reform. Of course we have a long way to go, the bill’s just been introduced and we don’t want it to get stuck, there are some very good animal bills that have been kicking around for years without moving. If we all row in the same direction, I think we can do this.

VBP: Why do you think it took so long for the US to catch up to other countries, such as Israel and Norway, who have long since banned cosmetic testing on animals?

ME: Well, we haven’t caught up yet! I think perhaps one reason is that other countries have a longer history of considering animal welfare issues as worthy on their own merit. So concerns about the suffering of animals perhaps is not as easily dismissed even in the face of well-financed industry that would prefer the status quo, or at least would prefer not being told what they can or can’t do.

VBP: What would you say to those who say, “Well come on, cosmetic testing hasn’t necessarily been illegal in the US, but who is really still testing cosmetics on animals these days?”.

ME: It is believed that fewer animal tests are run now than in the past, but data on the number of animals used, the number of animal tests conducted by or at the behest of cosmetic companies, is not available. Cosmetics companies are not required to provide information on the types of tests they use to determine product safety. Animal testing may take place at various phases of product development. Very few, if any, companies test their final product on animals, but tests may be conducted or commissioned at the ingredient or product development phase, and these tests may be conducted by the suppliers of ingredients or raw materials.

Many companies have made a strong commitment against animal testing at all levels of product development, and have signed on to voluntary certification programs. However, many companies have not committed to this type of guarantee.

There was a considerable amount of kicking and screaming from the industry over the EU ban, and there continues to be some hand-wringing about the global trend.

Ultimately, the only way to ensure that animals are not used in cosmetics testing, and that modern non-animal tests are used instead, is if it is legally required.

VBP: What are some the particularly heinous types of animal tests that are still occurring in the US this very minute, that the bill would ban?

Animals, including rabbits, guinea pigs, mice and rats are routinely injected, gassed, force-fed and killed for cosmetics testing worldwide. Companies don’t exactly advertise which tests they are using and there is no required disclosure. Apparently, this is not a great product selling point!

VBP: What are 3 cruelty-free and vegan cosmetics that are your makeup bag must-haves?

ME: My go-to eyeliner for several years now has been Urban Decay Glide On Eye Pencil in “rock star”, vegan lip balm from My Lip Stuff and I recently discovered The Body Shop All-in-One BB cream.

To read Monica’s full explanation of the effect this bill will have, check out her Huffington Post blog. You can also sign Cruelty Free International’s petition to ask your Representatives to become co-sponsors of the Humane Cosmetics Act. 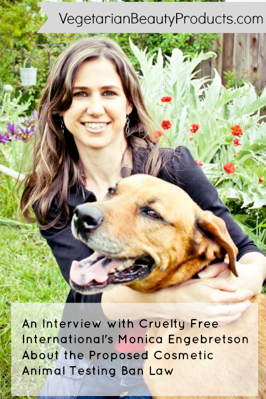