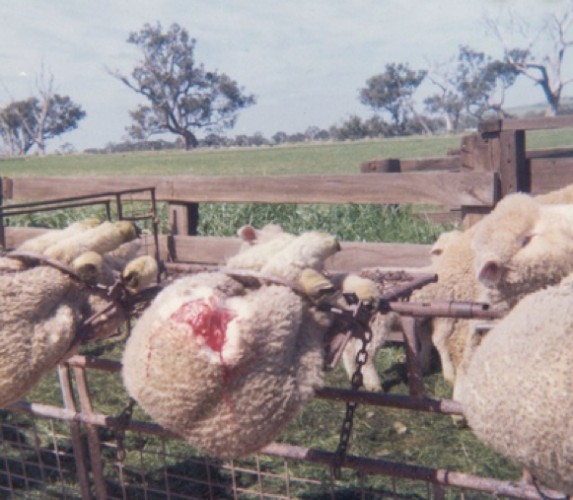 Updated: 1/16/20 We were quite surprised recently when we found that several companies who reported being both cruelty-free and vegan not only had products containing lanolin, but did not realize the implications of supporting the wool industry. One company we spoke with directly even stated that lanolin was not an animal-derived product. While we understand that the area of animal welfare is always a learning process, this illustrates how important it is to closely read the ingredients list of products you use, despite the claims made by the company. We also thought this was a great opportunity to speak about lanolin, where it comes from and its implications to animal cruelty, because we know that many of our readers are newly vegetarian and vegan, and so are still learning about these matters themselves.

Lanolin is a waxy substance derived mainly from the wool of sheep and is a waterproofing aid for sheep so that their coat does not hold water. Most lanolin is derived from the wool industry and is extracted at the time that the wool is processed for use in yarn, clothing and other textile needs. The extraction process is performed after the wool is shorn from the sheep and is rolled tightly between two rollers. The lanolin comes out as a yellow, waxy substance and is processed to clean it from dirt and other unwanted particles that occur naturally in sheep’s wool.

So if the lanolin is harvested after the wool is shorn from the sheep, then why is it a concern for beauty products who claim to be cruelty-free and vegan? Well one issue is that sheep kept for wool are usually victim to a barbaric practice called “mulesing”. Mulesing is a practice that is used as a tool to attempt to reduce flystrike, or fly infestation, on the sheep. During the procedure, skin is sliced away from the hind-end of the sheep to intentionally create scarring. The length of the scars typically extend from the anus to the hock of the hind leg.This scarring will then deter the growth of wool, which holds urine and fecal stains, which attract flies. The trouble is that this barbaric process is performed while the sheep is fully conscious, and there are no pain medications administered during or after the process. The sheep are returned to the pasture, with exposed wounds, to heal without any further medical aid. In the several weeks it takes these wounds to scar, they are susceptible to the very flystrike they are trying to avoid, as well as infection.

Further, there is significant evidence that this process is extraordinarily painful to the sheep. Even though basic logic would tell us that this is a painful process, experts have still studied it extensively to be able to have verifiable proof of pain. According to Australian researchers L.R. Fell and D.A. Shutt in their study “Behavioural and hormonal responses to acute surgical stress in sheep”, they observed this of newly mulesed sheep:

“Characteristically they stood with head down, nose almost touching the ground, back arched and body hunched and, maintaining this posture, they made sudden brief runs with a short, mincing gait quite unlike the steady walking of the controls.” For those of you who are not familiar with sheep or other animal behavior this is how an animal in extreme pain behaves.

If the concern about mulesing isn’t enough, then factory farming is a second factor in the issue with lanolin. As previously stated, lanolin is usually a byproduct of the wool industry, which has become another player in the growing factory farming practice. Factory farming is an issue that has been increasingly gaining attention as more consumers are becoming conscious about the sources of their food. Food is not the only product of factory farming as wool producers realize that it is more cost-effective to cram as many sheep as possible into a small, confined space. An undercover investigation by Animal Australia at one large wool farm revealed thousands of sheep confined in small individual pens, in sheds, chewing the bars of their pens out of stress and boredom. These particular sheep were confined in order to produce what the industry calls “ultra fine wool.” Further, regular wool-bearing sheep are often subjected to live exports, where they face grueling transports, worldwide, in confining conditions with no temperature control. Many fall ill and die during the journey. For those lucky sheep who are neither confined or transported, they are slaughtered when they stop producing quality wool.

Perhaps one of the most compelling reasons to not use wool-based products, such as lanolin, comes from legendary musician, Prince. He famously wore a faux wool jacket on the cover of his 1999 CD, “Rave Un2 the Joy Fantastic.” On the CD jacket liner he made a point to note that his jacket was fake wool, and went on to say:

“If this jacket were real wool, it would have taken 7 lambs whose lives would have begun like this … Within weeks of their birth, their ears would have been hole-punched, their tails chopped off and the males would have been castrated while fully conscious. Extremely high rates of mortality are considered normal: 20-40% of lambs die before the age of 8 weeks: 8 million mature sheep die every year from disease, exposure or neglect. Many people believe shearing helps animals who would otherwise be too hot. But in order to avoid losing any wool, ranchers shear sheep before they would naturally shed their winter coats, resulting in millions of sheep deaths from exposure to the cold.”

We could not have said it better ourselves!