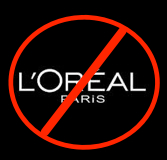 L’Oreal: Lead in Lipstick, Animal Testing and Other Atrocities

Beauty product giant L’Oreal has made a lot of headlines lately, but not in the most positive way. From the presence of lead in their lipstick, to resuming animal testing to sell new products to the Chinese market, L’oreal has found themselves in hot water with consumers who demand ethical practices and safer products.

L’Oreal is no stranger to controversy. Founder Eugene Schueller, who formulated the first hair dye product in 1907, was a well-known Nazi sympathizer and, to this day, the company is embroiled in a legal battle due to the fact that its German headquarters are situated on land that was confiscated from a Jewish family during World War II. Holocaust survivor Edith Rosenfelder, whose family was forced to sell their house and land to Nazi officials (and never saw the proceeds), has been in a legal battle to get her family’s land back from L’Oreal for several years. Because legislation has been passed stating that all such transactions were illegal, and thus invalid, the land is tecnhically owed back to the family. L’Oreal, however, has refused to relinquish the land, and the fight has been brought to the European Court of Human Rights.

The controversies have persisted throughout the years. In 2005, the Supreme Court of California found that a former L’Oreal manager was wrongfully terminated after she refused to fire a valued employee due to the employee being dark-skinned. The manager was ordered by L’Oreal executive, Jack Wiswall, to hire a blonde employee in place of the dark-skinned employee. In 2007 L’Oreal faced criticism by the British Advertising Standards Authority (BASA) for false advertising. L’Oreal’s ad claimed that their “Telescopic” mascara would make eyelashes 60% longer, when the mascara formula did nothing to physically lengthen eyelashes. In 2011 L’Oreal once again fell under the microscope of BASA when they banned two ads by L’Oreal subsidiary, Lancome, for airbrushing actress Julia Roberts and model Christy Turlington in both of their ads. BASA again claimed “false advertising” due to the misleading touch-ups.

Then there is the continued animal testing. L’Oreal is among the ranks of Mary Kay and Avon, the companies who have slyly claimed they are against unnecessary animal testing, while really meaning that they just did not have any need to do so at the time. Now that they are aiming to sell new products in China (because China requires it for companies looking to export their beauty products to China), they have resumed animal testing, but are lamenting that their hands are tied and they have no other options. They’ve also been craftily stating that they haven’t tested “finished products” on animals since 1989, which really means that they still test ingredients on animals, just not the finished product. It is this continued practice of animal testing that led to such a large backlash when L’Oreal purchased noted anti-cruelty beauty product company The Body Shop. Legions of devoted Body Shop fans were outraged to know that a company known for still testing on animals was the new parent company of a brand whose ethics they so appreciated. To date, L’Oreal owns a range of well-known brand names, including:

The latest PR disaster to hit L’Oreal is the revelation by the FDA that the cosmetic giant’s lipstick came out on top (in a bad way) of a list of over 400 different lipsticks that contain lead. L’Oreal, and its subsidiary Maybelline, were each found to have five of the 10 most lead-contaminated lipsticks tested. L’Oreal, and the FDA itself, were quick to point out that the amount found in their lipstick was well below what is considered safe limits. The limits to which they are referring are global guidelines for cosmetics, but there are no limits established within the United States. The closest mandate that consumer advocate groups could find was the limitation on how much lead can be found in children’s candy, a measure that the FDA says is apples and oranges compared to lipstick, which is not intentionally consumed.

Still, consumer advocates are quick to point out that that lipstick is constantly consumed since it is applied topically to the mouth. Mark Mitchell, MD, MPH, is the policy advisor for the Connecticut Coalition for Environmental Justice and co-chair of the Environmental Health Task Force for the National Medical Assocation. Mitchell contends that, even if the lead-levels in lipstick are low, “Lead builds up in the body over time and lead-containing lipstick applied several times a day, every day, can add up to significant exposure levels.”

Those who are working on behalf of the cosmetic companies, such as the Personal Care Products Council, point out that the lead found in lipstick is naturally occurring lead that is found in the minerals used to pigment the makeup. Consumer advocate groups maintain that this is not a sufficient explanation and have been steadily pushing for requirements, on both state and federal levels, that mandate the amount of lead allowed in a single cosmetic. All efforts have, so far, been successfully defeated by lobbyists on behalf of the cosmetic industry.

While the debate continues to rage as to how much lead, if any, is safe, two things are very clear: 1) L’Oreal has proven to be a company who is shrouded in too much controversy for comfort, and, 2) when it comes to peace of mind with purchasing beauty products, the smaller, organic and cruelty-free beauty product companies still reign supreme.

← Where Can I Find Health and Safety Information for Cosmetics and Beauty Products? The Skin Deep Program
The Dream Products Vegetarian and Cruelty Free Beauty Products →