Tarte vegetarian and cruelty-free cosmetics is no longer cruelty-free after selling out to Kose Cosmetics. Hi, all of you cruelty-free fashionistas, Jess here. I’m a contributing writer to Vegetarian Beauty Products and I’m here because I’m upset. No, I’m furious. Tarte, one of our favorite cosmetic brands to review, has sold out to a bigger company, Kose cosmetics, who still tests on animals. They then had the nerve to insult its consumers by trying to distance themselves from their new parent company by saying that Tarte will remain cruelty-free, as if consumers can’t figure out that, any dollars that go to Tarte, will ultimately end up in the hands of animal-testing Kose.

After outraged fans, commonly known as “Tartelettes”, responded to the news with dismay over the huge shift in Tarte’s alleged strong values, Tarte’s CEO, Maureen Kelly, took to Facebook to further insult its fans by saying:

I’ve been reading your comments and concerns over the past hour and wanted to let you know I hear them all loud and clear. I promise, I’m not going anywhere. I started tarte out of my one bedroom apartment and I’m still just as passionate about making innovative, eco-friendly products that deliver real results. I’ll still be in the office every day working with my team to develop new products I hope you’ll love as much as I do. Remember, tarte will NOT be testing on animals, or EVER test on animals. We are a cruelty-free company and will remain one. KOSÉ is completely on board with our position as an eco-friendly, cruelty-free company and has given tarte such a great opportunity to grow and expand around the world. It’s really an exciting time and we can’t wait to reach more tartelettes worldwide. Please look at the checklist below and be assured tarte is in great hands.

Unfortunately, and intentionally, Maureen completely ignored the actual comments being made, and twisted her response as if the concerns were something else. It was a shoddy PR maneuver at best, and a blatant insult to the intelligence of Tarte consumers at worst. To answer Maureen’s statement: The overwhelming concern wasn’t that she’d still be CEO, or that new products would continue to be developed. In fact, new products being developed is now a concern because the lingering question is: will those new products need to be tested on animals in order to be sold in the Chinese market, which requires animal testing and in which Kose distributes? In fact, we asked that question several days ago on Tarte’s Facebook page, and it is yet to be answered:

Rather, Maureen chose to pick and choose to answer the questions whose numbers were in the minority, so she could instead make it look like she was addressing concerns, without really addressing the actual concerns. The actual concerns are that Tarte’s money will ultimately end up lining the pockets of Kose, which tests on animals. And the $135 million dollars that Maureen took from Kose for her company was made from Kose’s multiple companies who have tested on animals. So, no matter how Tarte tries to spin the story, the bottom line is that animals have been tortured and killed for Maureen Kelly and Tarte to make all of that money.

It’s a shame because we’d love to see Maureen Kelly take the classy high road, like Paul Mitchell, but she chose money. And if there is anything we won’t stand for, is a cosmetic company that throws their supposed values at the window to make a buck. Because somewhere in Kose’s laboratories, now receiving further funding from Tarte’s dollars, is a row of immobilized rabbits who are forced to have cosmetics rubbed in their eyes, physically unable to produce cleansing tears, all for the sake of the perfect cat eye, or the perfectly lined lip. We’re guessing that those rabbits don’t really care about Tarte’s stance on animal testing. 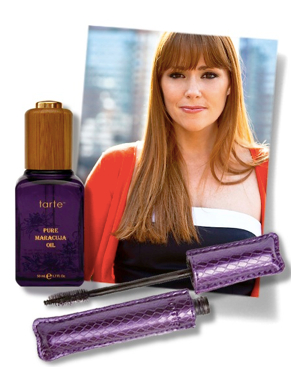