How to Manage Keratosis Pilaris, AKA Chicken Skin, Under the Eyes, in a Vegan & Cruelty-Free Way

Keratosis pilaris, KP, is the bumpy skin, commonly called “chicken skin,” due to its bumpy appearance, that’s often found on the upper arms. It is also commonly found in the under-eye area, making it difficult for makeup to be applied smoothly. The result is often a dry and caky appearance. Not attractive.

KP is caused by an excess of keratin, which is a protein naturally found in the skin. The extra keratin causes a formation of bumps after it entraps hair follicles in the pores. Unfortunately, the condition can often be worse during the cold season, when the air is dry. The most common treatments are doctor prescribed retins, such as Retin A, and serious hydration.

One of the most popular ways to manage KP are oils and butters, such as coconut oil, shea butter, cocoa butter and jojoba oil. These oils are super-hydrating for moisture-starved skin. The easiest way to deliver coconut oil to the under-eye area is in stick form, allowing you to dab it under the eye. It makes application smooth, easy, and mess-free.

Finding oil and butter sticks that don’t contain beeswax is incredibly difficult. Here are a few of our favorites:

1. Wonder Stick by Calise Soapworks – The Wonder Stick is made of hydrating oils and ingredients such as jojoba oil, shea butter and aloe. Your under-eyes will be thanking you.

To optimize the benefits of stick oils and butters, give your skin at least 20 minutes to dry after washing it. We like to keep our moisture sticks on our night tables so that we can give our under eye areas a swipe right before going to sleep, and right when waking up in the morning. 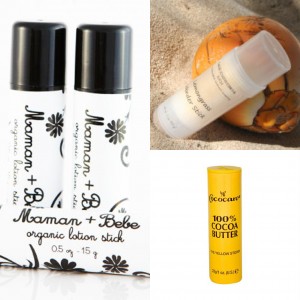